Since 2009, Adam has been playing Tama Drums.  Now he has the honor and pleasure of being an official artist.  His favorite kit at the moment is the Silverstar line.

The Xandra Corpora Band is recording their debut album!

The Xandra Corpora Band, the band Adam plays in, is in the process of recording their first album and plan for a Spring 2016 release. Keep your eyes and hears on the lookout for promotion shows, such as the one below!

The Xandra Corpora Band, the band Adam plays in, has released their debut album, "Soul Fires".  It can be downloaded at CD Baby or iTunes.
CD Baby 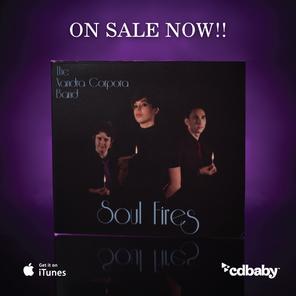 Adam is featured in a Tama Drums promotion video!

Adam appears in Tama's promotion video of their newest drum set, the Tama Silverstar Cocktail-Jam kit. This video was made to promote the new product at the NAMM Show in 2014.

Adam first began playing Evans Drumheads in 2002, and Promark Drumsticks since 2016.  He is in love with the Level 360 production and UV1 line.  His favorite sticks are the Select Balance and Active Grip, both Rebound.  They inspire him to play in a way that brings pure joy and inspiration.  He is also in love with the Accent brushes. They all feel and sound perfect!